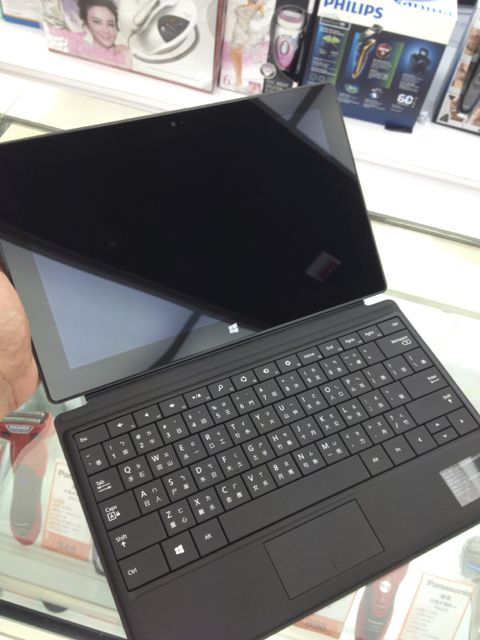 I told you it wasn’t something you might expect. After 17 Macs and countless iPhones, I just got myself Microsoft’s new Surface. I’ll be test-driving machines from both worlds from now on — the future belongs to a unified operating infrastructure, with the cloud and the Web out there as-is.

So far I am not feeling unhappy with the Surface, although Microsoft’s awful security problem is a problem on its own — do you really trust yourself with Redmond’s lack of security features? Also, whilst editing autoexec.bat wasn’t the first thing I had to debug, getting the Microsoft account not “fully done yet” still got me a little upset.

I have less negative views of Bill Gates these days than in my younger days, although I still regard the Steve (that’s Steve Jobs) as the Great Leader. The switch over to Surface is probably a wake-up call to Apple to innovate more. But iOS 7 later this autumn might very well turn the tables…

After an evening with Microsoft Surface RT, I am reminded why there is still Apple and the whole Mac OS & iEnvironment.

On anything Apple, downloading stuff, be it from the Mac App Store or from the iDevice’s App Store, worked just like that. Tracy just tapped one button on her iPhone to make the next WeChat killer download. Just like that.

By the end of the night, the Surface’s lone Web connection died. Getting Weibo for the Surface didn’t work out at all. Microsoft’s It-Must-Have-Been-Made-By-The-Department-Of-National-Security authentication system failed to download a single byte of app data.

By going overseas I can see how far behind China still is.
By being in Asia I can see how politically demented Switzerland still is at times.
By using Microsoft products I can still see how there’s still hope for Apple.

Indeed. Apple challenged IBM. Apple challenged Microsoft. And just like the US, which challenged the Brits to break free, it’s now the monster itself. I fondly remember my Macs that simply never broke — the Mac Portable worked great for years until the Sad Mac Icon (of Death) brought it down. (That was because I used ResEdit to work on a living, breathing, in-use copy of the OS back then!)

But now, I’m forced to restart the MacBook Air like three times again just to gain wifi access. Apple still seems to be living in the Stone Age — it pioneered wifi with the then UFO-esque AirPort, so it seems to have kept wireless as something “optional”. Wifi connections are now all over the place. It simply does not make sense to still default to a wired connection just to get something done whilst you’re on the go.

I’m not talking about a “harmonious” restart, which simply never happened. The thing was that I had to force the machine to shut down — and then wait a tad until it “comes to” and restarts. Apple’s QC (quality control) has really nosedived. I remember the PowerBook G4 (Titanium), whose screen just died less than a year of me using it. The iBooks were terrible — it was hard getting work done without the hard drive dying all the time. And now the OS is a mess. Obviously trying to milk itself rich in last-ditch efforts, Apple cares more about their iStuff than the thing that put them on the map — the Mac.

Apple’s now a living, breathing carbon copy of Microsoft. They go after the users (with sub-par systems and stability). They go after China (trying to brainwash everyone into donating their kidneys for the latest iExcuse). And now they’re turning on their loyal user base.

I’m off to get a Microsoft Surface. I know that Windows is close to death as well, but I don’t want my last few days here to be iDays…