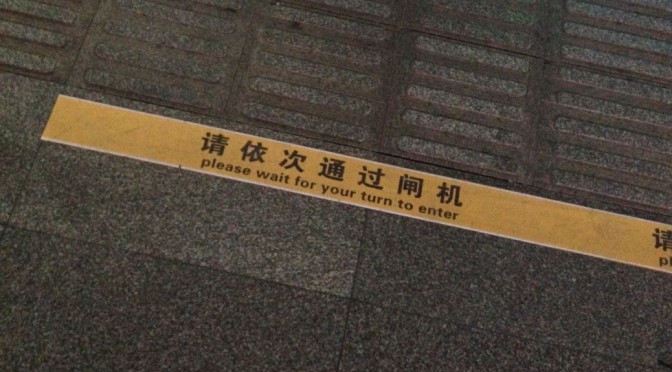 Despite my increased presence outside of Beijing this year, as a plan to explore this weird, at times wild, but always wonderful world of ours, I’m still involved in improving railway English for China’s railway system for 2014, and I’ll keep my “non-rail” identity (as in: not working as an official member of rail staff), as I’ve done so in 2013 and in initial efforts back in 2012.

I have to say that China’s railway system has remained mixed with regards to the English enhancement programme. On the one hand, I suspect those who drafted out earlier versions certainly aren’t pleased at their “hard work” being wiped out by a non-PRC citizen interested in pro bono enhancements to society, and the dispute over “Should we call Qingdao’s new station “Qingdaobei” or Qingdao North?” is still at times unsettled. On the other hand, though, we are seeing much improved English at an increasing number of stations around China — customers are now told to “please allow passengers more space” at ticket officers, and riders are being told at Ji’nan’s west station that “international passengers must book at manned counters” (instead of previously no English at all; although even here I suspect the English can still be improved further).

For 2014, these are my goals, which are slightly less on “new features” and more on “maintenance and sustainability”:—

The idea behind this is: once the whole system is set up, at least for the immediate-short term, it really doesn’t matter where I’m based: everything’s Internet-based, so it doesn’t matter as much if I’m in Beijing, Bristol, or Boston.