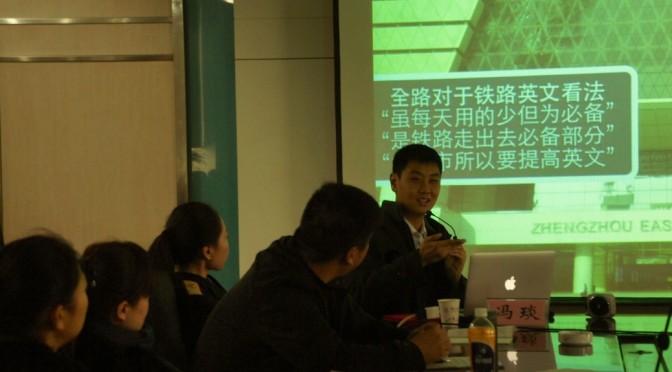 While still navigable, frequent train travellers in China will note a few bits of Chinglish — here and there — that seem to be stumbling blocks in an otherwise “smooth as silk” (sorry, Thai Airways International) trip around the country. There’s no unified way to say “a place to leave the station” (seen already: variants such as “Outbound”, “Way Out”, “Exit” or even the Pinyin “Chukou”), the station directions are a mess (“Beijingnan”? That’s Beijing South!), and passengers often are confused when they board and have a question for rail crew — and the train crew, too, are baffled!

So here’s indeed the need for unified, standardised railway English for China. However, this is much easier said than done! There are potential issues with using 100% native people or 100% foreigners; being such a massive country, you need an idea of how the whole thing works. Enter Everyday Rail English for China (Chinese: 铁路英文一天一句). I started doing this back in January 2013; over a year into the whole thing, it still is an ongoing project and is here to standardise and improve China’s railway English.

The whole backbone of the whole plan is a 10,000+ phrase “rail dictionary”, with half the database built and the rest to be completed by early July 2014. For just about everything under the railway sun in China, if there’s something in Chinese, more often than not, there’s a standardised English translation. All rail organisations that work with me in the Everyday Rail English programme use just one standardised “rail dictionary”, and these include the daily Weibo posts, “in-real-life” lessons, and all good-to-print documentation. For rail organisations that adopt these standards, a monthly “call-back” opportunity is offered, where the rail organisation writes back with how the new standards are helping out, or if there are any new issues yet to be solved.

In this whole project, I work with rail organisations around China, but also directly with peoplerail.com, the online presence of China’s national rail daily, and its position in the rail network makes it an ideal partner to “spread the gift” of standardised English to the nation’s rail stations. There are a few principles I take into mind when standardising and improving railway English, namely:—

In essence, there are just three reasons why I’m correcting and optimising China’s railway English for the low price of zero:—

This is why I’m improving China’s railway English for free. As an academic you can’t forever bolt yourself in some secret lab in an ivory tower trying to reinvent the wheel; you have to come out from the cold and help society at large.

Indeed, there is nothing better than to improve the world’s best rail network. The feeling that you’ve done something for a rail system that serves billions is something you can’t express in words. I don’t expect my contributions to land me a prize or a free ticket. All I’m hoping is that I would have done something that makes expats swim around China’s rail system with much more efficiency — and that we’re presenting a world-ready Chinese Railways the right way.

So far I have been helping China Railways get their English back on track by:—

The reaction hasn’t been muted. In fact, optimising China’s rail English garnered me significant attention from the Chinese media:—

In other news reports, including those on People’s Railway Daily (the official railway newspaper in China), Beijing Public Service Radio, and the Beijing Daily, coverage regarding me in general (about the railways) also mentioned my rail English commitments.