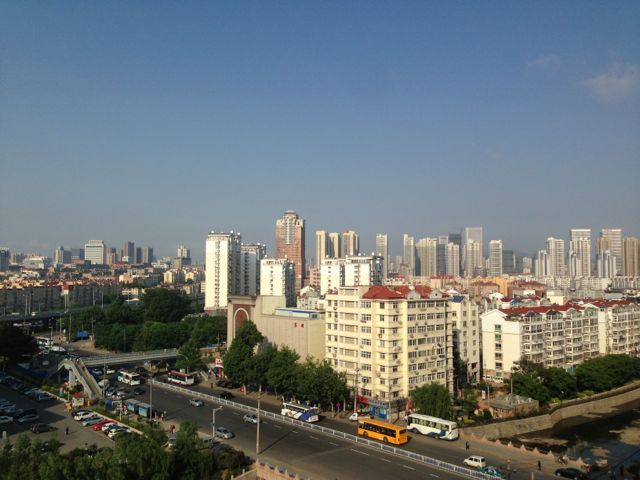 That’s zero metres above sea level, for the uninitiated. Some time ago, I joined my wife on a trip to the city of Qingdao (in eastern China). She had media business to do in Qingdao, so I went around the area while she got busy — I went as far out as west to Ji’nan (where I found my optimised English standards in use) and environs, as well as the cities of Zibo, Weifang and Gaomi.

Shandong finds itself at an HSR crossroads, although only some of its most important cities are linked to the national HSR system. There’s a 200-250 km/h HSR stretch from Ji’nan to Qingdao, which will soon have a newer 350 km/h addition. When that’s done, trains will take just over an hour to reach Qingdao from Ji’nan (at the moment, it’s upwards of three full hours).

The cities of Weifang and Zibo struck me as two cities I could really imagine myself living in. In Weifang I found wide, open spaces and (what else) a Starbucks and Pizza Hut, one next to the other, so I could do a little food refuge if a crass excess of seafood got me scared (I am, after all, a little more “continental” — remember Switzerland is a landlocked country!). Zibo, though, is a funny place. The city isn’t made up of just one locality, but a series — with the main city (Zhangdian district, Zibo) at the northernmost extreme. The main city district has a lot of buildings which remain those with a very 1980s / 1990s look; that’s no surprise given the fact that the city didn’t miss out on the first round of reforms (when Deng Xiaoping was around), but later rounds of reforms and development went elsewhere. My rail friend there told me that Zibo started off as a Tier 2 town, then was downgraded (unofficially) to something he calls “Tier 2½” — because it’s missing out on the latest round of reforms and opening up. A lot buildings in Zibo still retain the look they had two decades back; they money, in the meantime, has gone elsewhere.

Gaomi remained a sleepy town to me. Me and American-Chinese friend Will went there back in 2010; my granddad hails from there, so to give him a nice surprise, I picked up a train ticket from that town. I remember back in 2010 that when I went there, there was probably one major statue, a huge highway leading into town, and then all there really was — remained peace and quiet. They’re redoing the station — it’s showing its age, but is still incredibly busy.

I was also given a personal guide tour of Qingdao’s main station by station staff, who showed me how train crew got busy. Next time you board a train departing Qingdao early in the morning, just remember that you’re not the first onboard: the train pulls in an hour ahead and train crew have to prepare absolutely everything within around 30-40 minutes before they let passengers in. It’s work.

I hope to return to Qingdao soon — there’s a whole swath of eastern Shandong I have yet to totally explore!