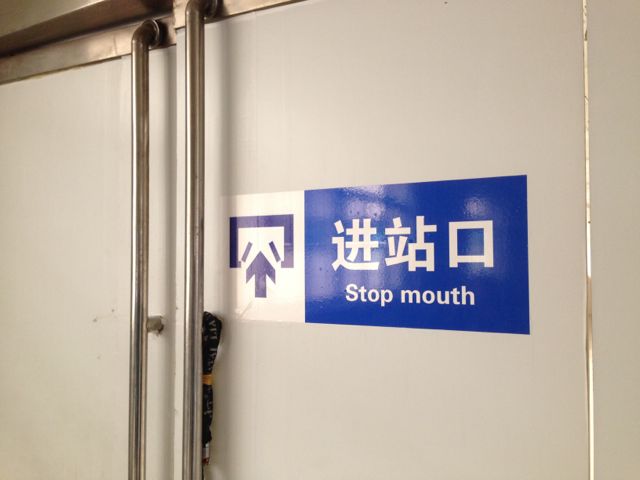 The guys behind the “North Jing” (Beijing) are masters in particularly easy and remarkably cheap methods aimed at apparently solving problems. Want more people in the Subway and off the roads? Make Subway fares incredibly cheap. Still too many cars on the roads? Implement road rationing policies. Still still an excess of motorised wheels? Institute a cheap lottery system which is impossible to win for most of us. Still still still too many cars? Decrease the plates available for the lottery and reintroduce the “odd / even plate” rule on (unpredictable) Bad Air days. Oh and also increase penalties for those caught resisting the rules.

An excess of Chinglish in the city? Get some retired academics with limited overseas experience into a makeshift “experts committee” instead of — what can I say — qualified people. (For rail English, I have one as well — but these are award-winning professionals and seasoned travellers in the group instead of people who slipped in “through the back door”.) Make them translate a 50+ page book they wanted to do about “proper English for locals” from standardised English into Chinglish. (I’ve the copies on my hard drive: after submitting the ones I improved and put a lot of effort into, the “revised” ones by a Chinese professor who must have had just limited experience overseas were so “Chinglishified”, I ended up staring at a wall, thinking if my head should head there (pardon the pun) because of this shock of total, utter disbelief.) Oh, and in case you thought Stop Mouth at this train station with service to “Xuzhoudong” (Xuzhou East, but with the cardinal direction illegally using pinyin) station were anything out of the ordinary — well, let me tell you this: City authorities are floating the idea of lowering the total score for English on standardised university entrance exams, so they will in future weigh less. That’ll be 100 points instead of the 150 points. The sad practice of bored academic sermons, sadly, will see no changes.

City Hall is thus saying: To solve the city’s Chinglish problems and to “make English easier”, we are downgrading its importance. Guess what: that’s a mere formality. Still part of the exams will be — I swear — questions where locals see only one correct answer, but where two correct answers will be comprehended by native speakers of English from Europe and North America. I swear, this will be utter hell to all students. Downgrading English doesn’t solve the problem: it merely aggravates it. You will still be stuck with the average local unable to respond to your simplest-of-all-demands in English. You will still be stuck with bilingual essays that earn an A+ in Chinese — and merely, at best, probably a C in English. Oh, and not to mention the massive plagiarism in the academic world. How do you identify a paper from mainland China? Chinglish throughout, terrible grammar, and a way of thinking that just befuddles the average overseas academic. Is that what you want — or want to keep?… and I ask that to city authorities both before and after the points downgrade. Can you swear in the name of God Marx that you can totally annihilate, say, Chinglish, by downgrading the importance of English in the university entrance exams? (I really can’t see how that could work.)

Always willing to listen to a second opinion, I put this question forward to my class: Do you think we should downgrade English? Nearly all students sounded a clear NO — some were outright furious at the idea. It seems the new trend in China is to “throw up” on problems instead of solving it. HSR train crash (July 2011)? Downgrade new lines from 350 km/h to 250 km/h. Worsening smog? Force people through ridiculous lotteries just to get a car. Chinglish conquering Beijing? Downgrade the importance of (proper) English.

I’m pretty sure that, some years down the road (when “more competent” people with a fully functioning brain take over), we’ll take a second look at history — and regard that those who have run our failure of a capital in these years (at present) the same way as we looked at George W. Bush when he left office.